Someone is after you. After years of traveling, living your life on the road--trying to finish what the Family couldn’t, all hell is about to break loose.

You’ve lived your whole life as an Abrams and it seems like now, the Family’s troubles are finally catching up with you.

Larkin is an interactive-fiction where you play as a vampire hunter-turned-preacher, presiding over the town of Larkin, Nevada, and all the chaos that encapsulates the town.

For over a decade and a half now, you’ve traveled up, down and across the country--running schemes and hunting fiends with your mentor, con-man-by-day, vampire-hunter-by-night, Wyatt Abrams--the prolific vampire slayer and the living descendant of Gregory Abrams, founder and prophet of the Abrams Family, the nomadic vampire-hunting cult that raised you--and was wiped out years ago.

All seems to be business as usual for you and Wyatt--that is, until you find out about a bounty on both your heads. Suddenly forced to flee the hunting world, the two of you take refuge in the town of Larkin, Nevada, where the title of town preacher is unexpectedly thrust upon you.

Now, left the sole source of morality in a place rife with chaos and sin--whether that be spawning from the recent and suspicious mining disaster, the reclusive family that runs the mortuary and owns half the town, or the strange encampment of people just south of civilization, calling themselves the Children of Cain.

Larkin is a vampire western choose-your-own adventure game, with focuses on romance, religion, horror and complicated family dynamics. The game and this blog are currently rated 16+ for a full list of content warnings you can head here.

Wyatt Abrams [M] the last surviving descendant of gregory abrams, so-called prophet and founder of the abrams family, a nomadic vampire-hunting cult that was massacred almost two decades ago. once a prolific vampire hunter, wyatt used to strike fear into the hearts of many, but nowadays without his family to back him he’s more washed up than anything. liar, thief and con-artist, wyatt has taught you--his adoptive child--everything he knows about hunting and swindling.

.Doctor Cyrus Sokolov [M] [RO] larkin’s local doctor and head mortician, though in larkin he seems to get more work out of the latter of those titles than the former. quasi-mayor of the small town, he operates as the apparent patriarch of the blossoming sokolov empire. he’s more than a little suspicious larkin’s newest preacher, but then again, is he really wrong to be?

Dominic Sokolov [M] [RO] the youngest scion of the sokolov family, dominic works as assistant mortician in larkin, though he’s much more interested in larkin’s living townsfolk then the dead ones he’s been charged with taking care of. with seemingly endless information on everyone and everything that goes on in larkin, mister sokolov might not be the worst friend to have.

Celina Sokolova [F] [RO] despite the misconceptions among the townsfolk, the reclusive third sibling of the sokolov family, celina, is actually the family’s eldest. hardly leaving the sokolov mansion, it’s rumored around town that she’s been struck with some sort of sun-related illness, others seem to hold the opinion that miss sokolova simply sees herself as too good to linger amongst the common folk. whatever the case may truly be doesn’t much matter to the people of larkin, after all, it's much more fun to gossip.

Jacob Nash [M] [RO] larkin’s only practicing attorney and resident do-gooder. after passing the bar exam, nash headed out west in the hopes of making a real difference for the people there, only to spend most of his days settling petty disputes and notarizing documents. despite his disappointment, however, nash has managed to keep a level head and his fondness for the people of larkin, even though he’s not so sure the sokolovs have the townsfolk’s best interest in mind.

Rose Holloway [F] [RO] larkin’s most recent transplant, that was, until the preacher showed up. former city-girl, rose has adapted to both life out west and on her own, the only way she knows how--by pushing through it. owner and bartender of larkin’s only saloon, the emerald, rose is a popular figure around larkin whether she likes it or not, but whether that has more to do with her occupation or the fact she also happens to be larkin’s youngest widow is still a topic up for debate.

‘Ace’ Zhang [M/F/NB] [RO] vampire-hunting-mercenary extraordinaire, the last the preacher knew of ace, they were the young hot-shot on san francisco’s hunting scene. once upon a time ace was a prominent figure in the preacher’s life, the first real acquaintance they managed to make on their own, someone outside of wyatt’s sphere. growing up a member of the guild, their life is one that’s mirrored the preacher’s. maybe that’s why the two seemed to be linked so closely during the preacher’s time in california, whether that was as friends, rivals or something more.

Hollis [M/F/NB] [RO] an enigmatic figure around larkin, hollis serves as a lieutenant for the children of cain. one of the cult’s few members to make the long trek from their encampment in the desert to town more than once. talked to by few, hated by most, hollis bears the reputation of the people they represent to the town of larkin--one, that isn’t particularly favorable.

where's the button to go to the next page????

Really love this IF so far, looking forward to reading more. ♥︎

I did find an issue near the end of Chp 2 (while in the Sitting room section), the "Don't beat around the bush[...]" choice seems to lead to a dead-end for me no matter what decisions are chosen afterwards.

Again loved the story so far :)

Can I recommend you add a feature to change the font size? I keep having to zoom in to be able to read the text, then zoom way back out to be able to click on the choices at the bottom. :(

Anyone else being called their nickname when asked to choose/input a name?

Hey! I'm so sorry about that!! The issue should be fixed now and you'll be able to input your name without problem!

since this is now on itch.io will you stop updating the game on dashingdon or will you update the game on both sites? I absolutely  love your game and the story it has and I  just want to know witch  site I should look to for updates.   ^_^

hey! thank you so much for playing! <3 Larkin'll be updated here on itch from now on, and once the game is ported completely over from cs and uploaded here (through chapter three) I'll be deleting the dashingdon version.

Ok! Thank you so much!

Really loving the demo (since before twine and I love the port)! However, just as I say goodnight to Wyatt in Chapter Two, I reach this problem, no link to click and go to the next passage T_T 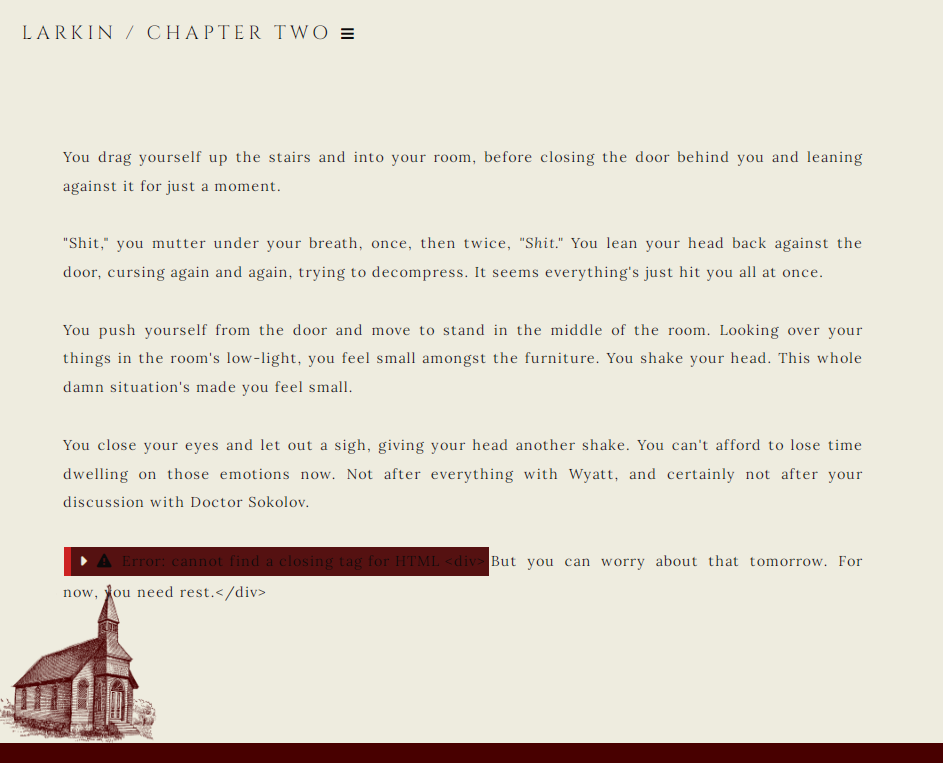 I just played this for the first time and it was so good? The setting is so unique- cowboys and vampires in little shanty towns is not something I see everyday, and it scratched an itch I never knew I had. Throw in cults and cons and I'm salivating. The characters are all very interesting, and I especially have an eye on Hollis. twirls hair Big gruff lady, what's not to like? I also really dug the theme for the game and the UI. Idk, it was very satisfying to look at while playing.

I did catch a few errors throughout the game, the most prevalent coming at the end of the game, where two sections of text from previous scenes repeated underneath the ending message. I'll put a few photos of it: 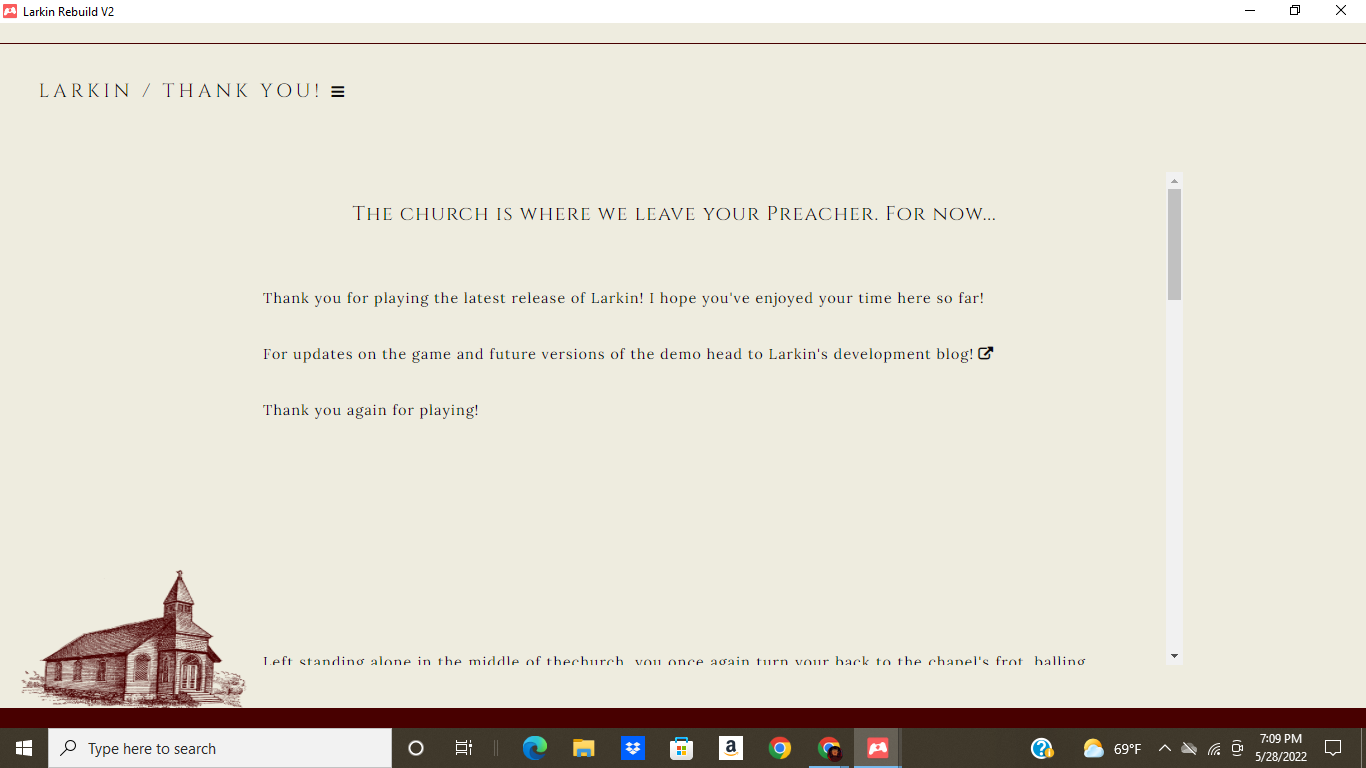 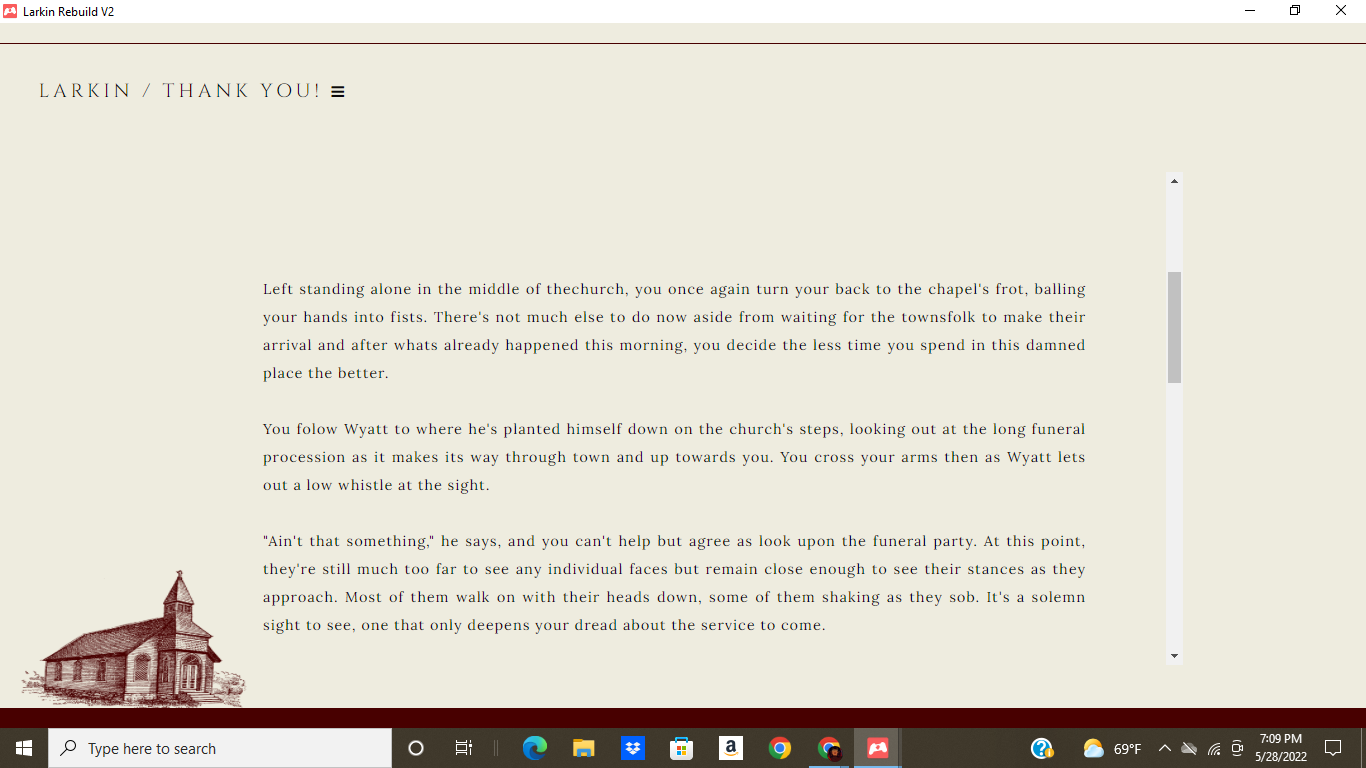 But back to game-talk: aside from the errors, I thoroughly enjoyed the game! My little Dina though? Probably not so much, considering the shit she just got into. Keep up the good work!

How far does the current demo go? I keep receiving an error right after talking to Cyrus, is that the current end?

Really interesting so far! I can't wait to see where the story goes!

I loved everything about the demo! Can't wait for future updates

I loved it so much! I actually got a bit emotional with the whole talk with Wyatt...

absolutely loved the demo! So excited to see where the story goes (and to meet Celina haha)

I love this! Looking forward to more!

thank you so much for playing! <3 this was something of a soft release, I'll have something more up tomorrow!